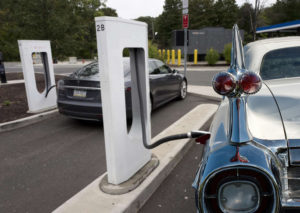 This is another subject that is discussed at length on all of the internet EV sites. I am an electrical engineer but found myself having a hard time understanding this, because in my mind Volts create Amps (or the other way around) and the two are inter-dependent with a very defined ratio, while on all of the expert-sites they are able to somehow manipulate both independent of one other. The only way I can wrap my brain around this is to more or less let this be and follow the Basic Rule of EV conversion electricity.

The basic rule seems to be that Volts drive your top-speed, Amps drive your torque, and kWh’s drive your range. From there, let the controller be the magical thing that figures out whether the Volts or the Amps rule. All I need to be concerned with is that the controller takes the kWh’s and sends the right number of them to the motor to match the throttle-pedal.

In my application the primary design-consideration is range, then (cruising) speed & efficiency, and acceleration is a distant last. Per the basic rule, that says:

#2, get the battery Volts as high as possible to get top-speed. In this case it’s 300+ Volts, because that’s as high as the controller will allow.

#3, create the Amps to get torque. For me that’s the 3rd leg on the stool, so it is what the drive will have to figure out given what I selected for #1 and #2.

If I end up with the long & narrow Tesla S/X cells (and it looks that way), then I need to get as close to 340V as I can (max input for the controllers). Each Tesla cell is 63V at peak charge, so the best I can do is 5 Tesla cells in series so 315V. One more would put me at 378V and that’s way over.

Looking at the chassis, the best I can fit in the space where the original gas tank used to live is 14 cells , and 12 would be “easy”. The rest would need to fit under the hood, and 18 is tight but 21 cells would be a miracle. So, for the first round of the project, I am going to go for 12 cells in the back and 18 up front. If I find the range still isn’t there I’ll try to figure out 14+21. I’ll make sure the battery boxes are ready for those extras (so I wouldn’t have to re-fabricate too much), and here goes.

To drive the dual Siemens Azure motors, I am using two of the matching Siemens Azure drives. They’re called the DMOC 645. There are (quite a few) other drivers out there for these motors, and most of those are simpler to use because they come with actual vendor-support. The Siemens drives are out of the Transit-van bankruptcy, and they are what they are. They will handle are fairly high input-voltage (340V) and can drive the motors at capacity. They are water-cooled, and with the amount of power going through these units I think that is pretty much required. 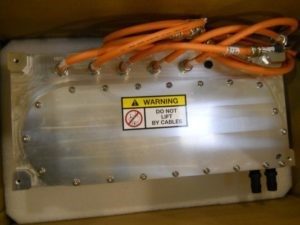 The biggest mis-conception out there about these drives is that they are super-complex to get going. So far, I think that’s due to people not finding all of the manuals. The documentation of these motors & drives is scattered all across the internet, not always in logical places, and I will attach them to the library section of this web-site. Disclaimer: I have found these on the open web, but if anyone feels I am violating their copy-rights etc by posting the manuals for a bankrupt company’s unsupported product, please let me know and I will take down the links to replace them with yours (so people can call you for support).

According to the documentation and my 1st round of experimentation, there are 2 modes to control these drives.

Path #1 is through something called CAN-bus, and it is by far the most feature-rich way of doing things. It’s also pretty complicated, but there are support products out there like the GEVC project that have figured out how to talk CAN-bus based on simpler, more DYI methods of control. Right now, my project is complicated enough that I don’t really want to get into the added layer of complication of controlling a (to me) mysterious drive through an equally mysterious GEVC module into an un-tested motor, so I’m skipping this until I figure out that I have to have feature X. 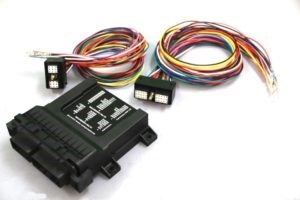 Path #2, and the way I’m doing my testing, is in what’s referred to as Pedal-based. It’s a basic pedal/potentiometer with some relay-logic to turn thing on/off and forwards/backwards. You will need some understanding of electrical to figure this control-version out, but it’s not hard. For now this is how I am installing things, and if it turns out that I don’t like the feel or the feature-set on the car once it’s moving I’ll break out the GEVC’s and see how that reacts. But, the first tests look like I’ll be fine going down this path.

The drives allow for operation in 2 modes: constant rpm’s and constant torque.

The constant rpm mode is something like cruise-control, and in my case with 2 motors in tandem would require super-precise matching of the two motor Volts and Amps. That’s a tall order, so I am trying mode 2 first. Constant torque sets each motor to push at a fixed rate, and to let the rpm vary a bit to get there. That should mean that if one motor is getting ahead of or behind the other one, it’ll turn just a little faster or slower to make the two balance out again. In constant rpm mode, the two motors would be fighting each other rather than try to compensate.

The exact wiring setup will be posted in the archive section of the web site.